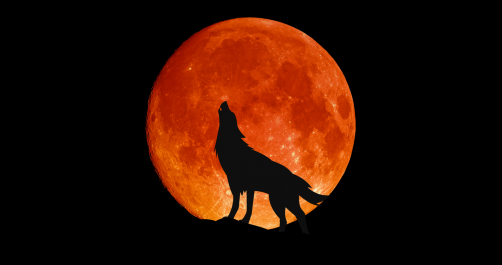 The first full moon of the calendar year is called the Wolf Moon.  This year, on January 10 in the northwestern US it was spectacular.  This year’s Wolf Moon was also a lunar eclipse, as the earth passed partly between the moon and the sun.  In this scenario the earth’s atmosphere refracts the sunlight and causes the moon to briefly appear reddish colored.

I have to admit I’d not heard this term before, but I was curious about it.  It appears the term likely comes from two separate lineages, each quite old.  Ancestrally, the Native American Indians and Medieval Europeans had similar names associating this first full moon as the Wolf Moon.  It was believed that wolves howled more this time of year because food was more scare.  Medieval Europeans associated this time of year with the wolves being more aggressive and hunting wider territories.  Some biologists believe that because winter sky is so clear that a full moon creates better hunting conditions for wolves, and it is also the beginning of their breeding season.

It all sounds plausible and in reality we really don’t know a lot about wolves.  We don’t have as much scientific information and data on them as we do about other western animals, and this partly contributes to the complicated and problematic issues we are living with wolf management all through the West.

I got to thinking about winter survival strategies for deer, elk, and other prey animals and how do they  outwit predators this time of year.   During our annual outfitter meetings (we only seem to have time to get together when we have 18 hours of night) I asked state biologists about winter elk and deer predation.  Studies of collared elk, deer, wolves, and deer are starting to shed some fascinating light on the interplay of these species.  The strategies they use in the fall to evade hunters is effectively employed in the winter months as well – but for different reasons than you might initially think.

Elk and deer tend to feed at night in open country – large meadows, hillsides, and the like where visibility is high.  They move into the heavier timber during the day.  Contrast that with the preferred hunting strategies of the largest and most consistent elk and deer predators – wolves and mountain lions. 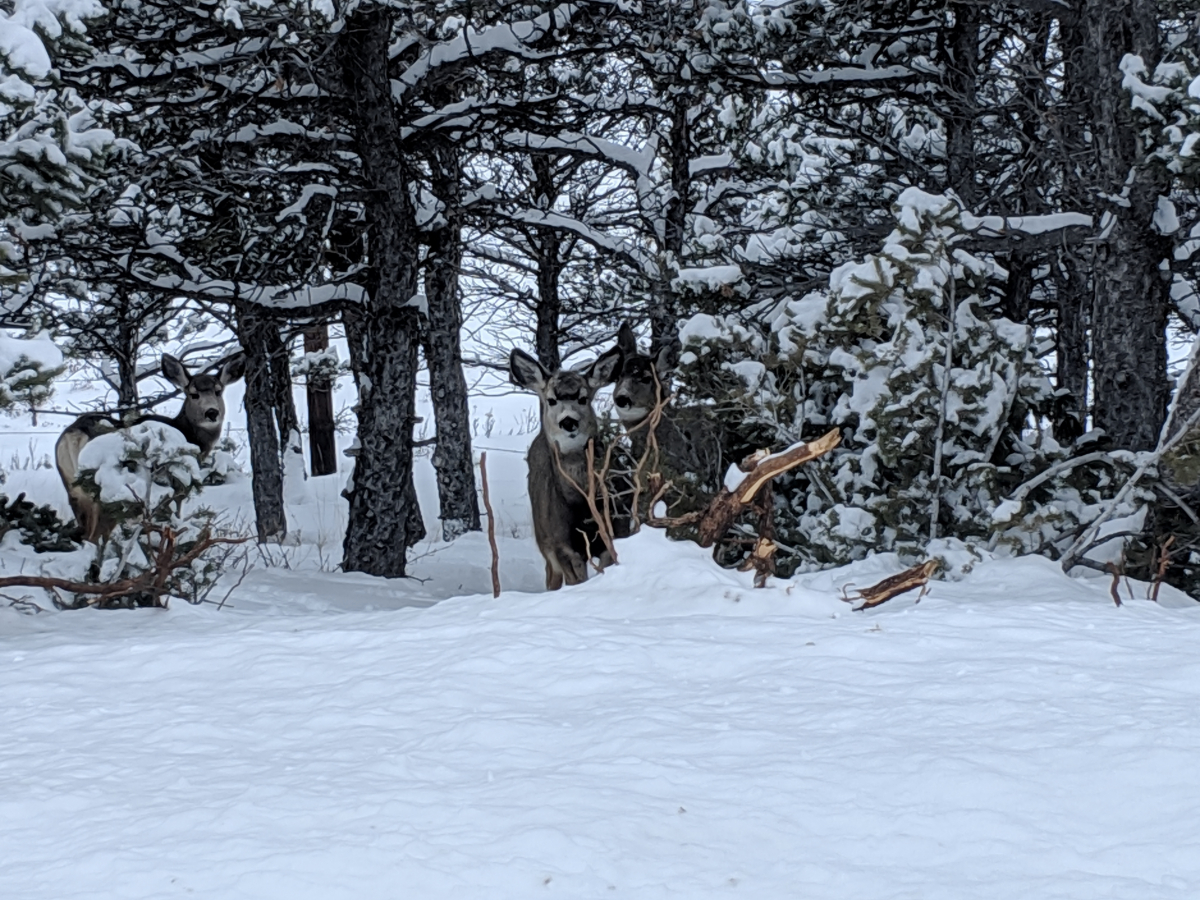 Mountain lions are known to inhabit rough, rocky, timbered terrain, but mainly hunt at night.  In particular, the males will cover the most ground on any given night.  The females hunt a very small area and often more frequently on small game as they often have kittens to drag around.  These big cats, like our barn cats, tend to lounge and sleep most of the day. 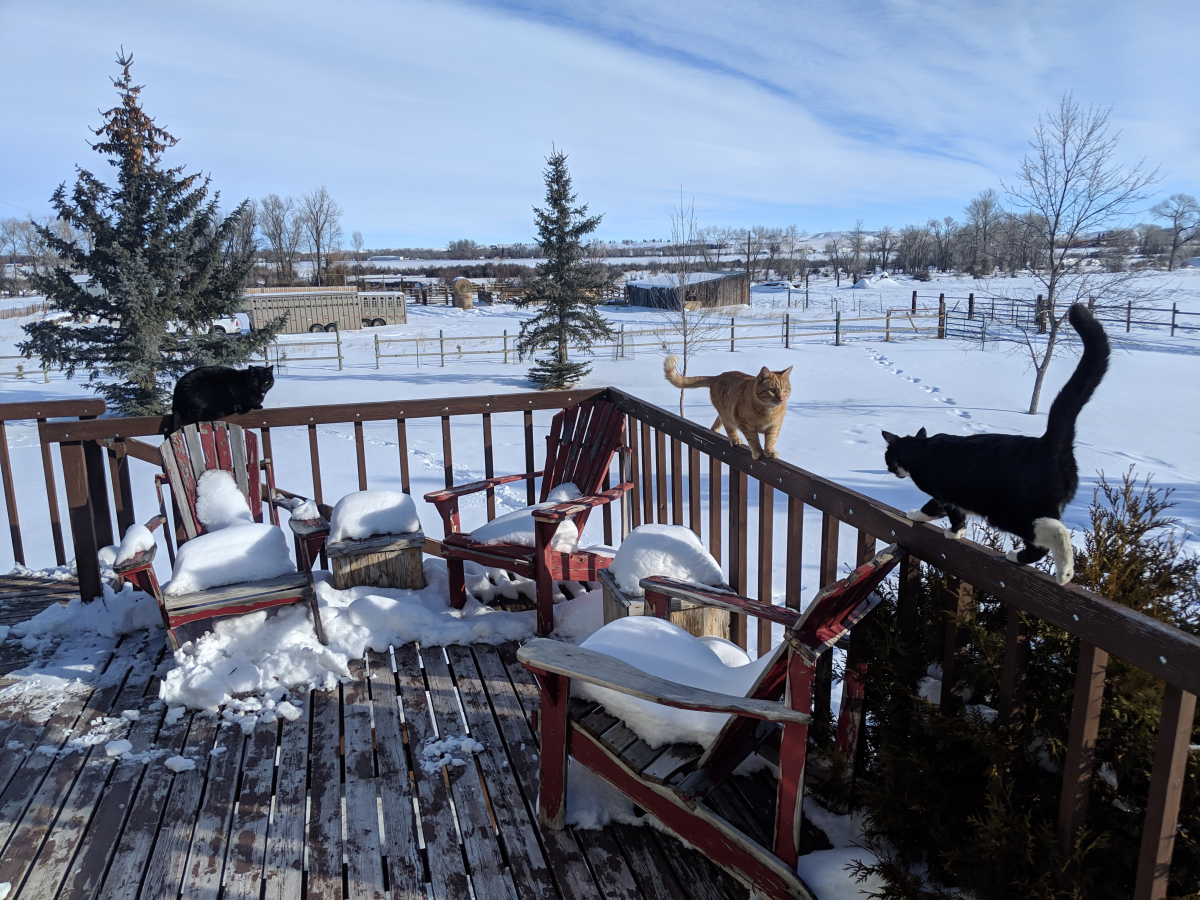 Wolves are prefer to hunt in open country, ridgetops, and meadows in early mornings and evenings. Wolf hunting techniques are not nearly as effective in timbered, rough country.  On our trips, whether they are traveling summer packtrips or back country hunts, the most common time we see or hear wolves is dawn or dusk hours, and usually right at the transition between forest and meadow.  We rarely see wolves moving during the day and even more rarely hear them at night.

The elk and deer have learned that by spending days in the timber and feeding at night in the open fields, they can more readily avoid carnivore hunting pressure.  They are using “risky” places at safe times.

Additional information about predator/prey selection is beginning to show up.  Though causation is not as firmly established, here in Montana we are seeing significant increases in mountain lion populations.  In the more mountainous areas, or mountain valleys, biologists are now seeing mountain lions surpass wolves as the prime elk predator.  That’s a significant feat given that cats hunt along and a big lion is around 140#.  Elk are generally 700-800# (and often much larger).  By way of contrast, wolves (90-110#) generally hunt in packs of 3 or more.  Indeed, several studies indicate that elk respond to mountain lion pressure more readily and with greater vigor than wolf pressure.  The Rocky Mountain front herds in Montana spend the winter months in the prairie/mountain transition zone.  While often bitter cold, this area blows snow off rapidly and provides treed coulees and other windbreaks.  In this area, the terrain favors the wolves so they are more efficient in the winter.  However, for the elk and deer that move to the mountains it now appears the lions are the more proficient predator.